Although I don't condone his style or language, he says a lot of things right and a lot of the right things.

Although Pro-Democrat, this guy has a lot to say that even betrayed Republicans can agree with.

BUSH - THE ENEMY OF HUMANITY


THE MOST HATED MAN EVER - MUST GO
by voxfux 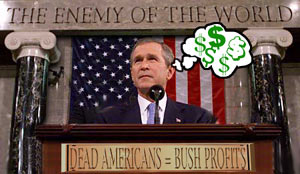 The message is loud and clear, to all nations of the earth, from George W. Bush - Get your weapons ready, aim them all at American people, American soldiers, American interests and America herself. Because we're coming to get you - all of you.

Know this - That this human garbage, George W. Bush and his criminal industrial cartel ONLY cash in when Americans get killed, they NEVER make money when there is no Americans being killed in war. NEVER!

So American death it is! And American death it is going to continue to be, so long as nothing is done to remove this cancer on America, this profiteer in the White House. Bush and his criminal military, industrial and energy cartels which buttress his murderous regime want Americans to get killed. That's what they are setting us up for. That is what they do.

That, and loot the US treasury. They have not only successfully looted the massive surplus in the treasury, they have looted your children's treasury and your grandchildren's treasury. That's what they do, that's all they ever intended to do. They are treasury pirates - and murderers. Why the *** do you think that the Skull and Crossbones is their family crest?

BECAUSE THEY ARE PIRATES. Treasury pirates and looters and murderers. They thought that by looting enough money from the US treasury and giving it to their buddies in the defense establishment and creating an atmosphere of military intimidation and a general police state environment that they could stave off any real challenge to their rule. And with their successful assassination of Senator Paul Wellstone and his family still lurking on every opposition Senator's mind they have sent a chill on the American body politic - watch out, this is not the democracy you are used to. It's a different game since the Bush criminal cartel seized power.

And they have no intention of ever relinquishing power again. And with all this looted money plus the 87 billion more they have just looted form your future (with the help of obese Republican Congressman, Senators and the media) they may never have to relinquish control ever again.

The deal with that 87 billion is as follows: The corporations who receive that money know the protocol. The protocol is that they simply are beholding to Bush and are expected to redirect at least one percent of that money back to Bush. Key employees in those defense and intelligence corporations will be given bonus money and that bonus money is to be earmarked for deposit into the Bush campaign war chest. That's how it's done folks. It's simple. It's easy. It's not written down - so don't ask to see a smoking-gun memo or email of this protocol because you will not find one. It is the shadow government at work. It's a simple game. It is done with a handshake and a nod.

The game is - You are FORCED to pay THEIR tax. and then when all of YOUR money is in THEIR treasury, they loot all of YOUR money (defense procurement process) to buy weapons from THEIR own companies. It's easy to do because the checks and balances that are normally found in a democracy no longer exist since the Bush crime cartel snuffed out Senator Paul Wellstone and seized tripartite control of the American government and transformed it into the American death machine that it is these dark days. It's easy for Bush to play this game because there is a majority of these Republican pigs feeding off the trough of the American treasury in both the Senate and the House. The Republicans gave and will continue to give Bush "carte blanche" to loot an apparently infinite amount of money from US taxpayers to divert to his dads buddies in the defense industry. Unless we get rid of the Republican majorities in the House and Senate this feeding frenzy, this utter siphoning of money from US workers, will never end.

But with those new and improved republican manufactured ELECTRONIC VOTING MACHINES there is ZERO chance that you will ever be able to vote out these Republican bastards. These machines are designed to install Republicans wherever and whenever necessary. And you cannot audit them because they are designed to not allow auditing and you cannot examine the electronics or software because the Republicans who designed them are citing the primacy of their "Trade Secret" over that of democracy. And Republican Judges will back up the trade secret argument and so democracy is imperiled. Expect waves of mysterious unexplainable surprise Republican victories in key districts to be the order of the day.

So those who argue that we need to keep our guns ready may be more correct than you would like to believe because, people, it's starting to appear that, short of bloody revolution, there is no way out of this one.

Think about this now - Just one tenth of one percent of the 87 billion redirected to the Bush campaign war chest is 87 million! But a whole 1 percent is a whopping 870 million. (which is ten time greater than any sum ever raised for a political campaign) And while the Bushes would never allow 870 Million to appear on Federal Election Commission ledgers (because the criminality would be too obvious to cover) they know how to turn that money into "soft" money. And the soft unaccountable money will flow like water in the days leading up to November 2004 and Bush will steal the election once again. Absolutely positively Bush will be declared the winner by the media and or the supreme court in 2004 - Absolutely positively.

Unless he gets caught with his alleged

homosexual college buddy in an uncompromising position or unless he gets caught with his dick in some interns mouth there is just no possible way a Democrat can remove him from office. And the American people are so beaten now and are so entirely disenfranchised that even if he did get caught in the worst thing a president can now be involved with - a sexual scandal, it still wouldn't matter. (If you know anything about the Bushes you will know that THEY WILL NEVER GET CAUGHT IN SEXUAL SCANDALS. Quite possibly because they don't even have such things.) But in the slim chance that he did get caught there is nothing the American people can do about it. Their votes don't count because Republican voting machines do the counting. And a Republican judiciary assures that accountability and audibility are out of the question.

Without a doubt - an OVERWHELMING MAJORITY OF AMERICANS HATE BUSH AND WANT HIM REMOVED but since the mechanisms of elections and media are controlled by the Bush group it simply doesn't matter. Americans will be told that they overwhelmingly support Bush and that is that.

For it is the whores in the media who are going to be getting that campaign money come election time - it's easy to predict what they are going to be doing - they are going to be smoking on Bushes shaft right down to the balls - or their filthy rich media bosses will fire them summarily. Because if you are a journalist and your boss just received 20 or 30 million dollars from the Bush war chest (plus several million under the table) you know, you just feel it, that you better not tread on Bush toes or you'll be looking for another job fast. Money talks and criticism of Bush, walks. That's how it works people. That's reality. That's what Bush has transformed America into. It's a pig sty. It's a lie.

Either way, the solid 87 million plus the several hundred million in invisible unaccountable money alone is orders of magnitude higher then what any of these Democratic pussies could ever hope to raise no matter how much industrialist dick they smoke. (Kucinich excluded) The problem is that Kucinich is in dire need of a makeover (ears pinned, new hairdo, and some beef on his frame) but it's just not going to happen in time. It's too bad, he seems like a great guy but the Bush money will tear him apart.

And so we are witnessing the biggest **** of the American people in this country's history. Americans are getting it hard and it will never stop until Bush and anyone related to Bush is removed from office.

Bush and his team of pigs are replacing our formerly great and prosperous nation with a televisual simulation, suitable enough for the sheep, he thinks we are. And unless we do something to remove this cancer soon, the sheep will starve to death, I promise you this.